We only use google analytics to monitor web performance, and improve the user experience. You can see our cookie policy, here. 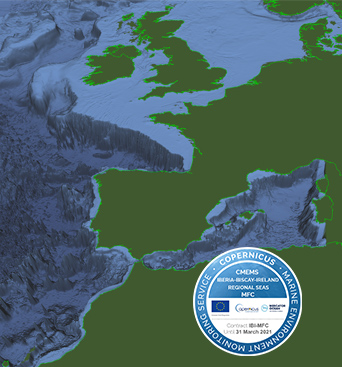 >>> Bathymetry on the European Atlantic coast, area covered by ocean forecasts operated by Nologin Consulting S.L. at the IBI-MFC center of the marine Copernicus service

Specifically, Nologin Consulting S.L. is responsible for the transition, launch and control of operational forecasts of ocean circulation, waves and biogeochemistry, both on short-term and climate scales.

The system generates predictions for the three above-mentioned components by means of complex numerical models that solve the systems of equations governing the ocean dynamics. High Performance Computing resources from the Supercomputing Center of Galicia (CESGA) are used to run these models, guaranteeing a robust, reliable, and timely execution.

The IBI-MFC is driven by the Copernicus Marine Service policy, which promotes a constantly evolving service that is always attentive to the requirements of its users. Therefore, the system has state-of-the-art models, and integrates, among other features, satellite observational and in situ measurement station data assimilation schemes, and coupling between different components.

Do you want to know more?